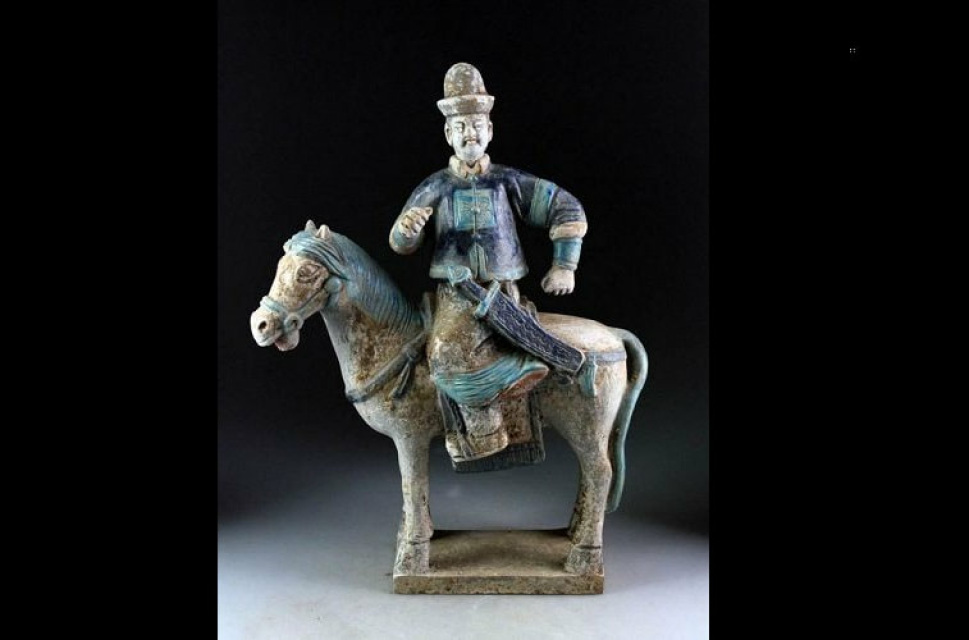 A rare tomb pottery officer that was part of a small group of less than 10 specimens from the same find, all Horsemen with Mandarin batches and different weapons, and postures.

The pottery horseman a high-ranking soldier equipped with a huge broad sword at his side and body armor in blue and turquoise with Mandarin batch on the chest at back. He is riding a large white horse and his is twisting in the saddle.

A mandarin batch of square (traditional Chinese: 補子; simplified Chinese: 补子; pinyin: bŭzi; Wade-Giles: putzŭ; Manchu: ᠰᠠᠪᡳᡵᡤᡳ sabirgi; Vietnamese: Bổ Tử; hangul: 흉배; hanja: 胸背; romanized: hyungbae), also known as a rank badge, was a large embroidered badge sewn onto the coat of an official in Imperial China, Korea and Vietnam. It was embroidered with detailed, colorful animal or bird insignia indicating the rank of the official wearing it. Mandarin squares were first authorized for wear in 1391 by the Ming Dynasty. The use of squares depicting birds for civil officials and animals for military officials was an outgrowth of the use of similar squares, apparently for decorative use, in the Yuan Dynasty. The original court dress regulations of the Ming Dynasty were published in 1368, but did not refer to badges as rank insignia. These badges continued to be used through the remainder of the Ming and the subsequent Qing Dynasty until the imperial system fell in 1912.

Old Danish Collection of about 10 items from the same tomb.

Sold out
Add to Cart